A.D. and Santarcangelo Festival with the support of Carrozzerie and n.o.t Roma and Ostudio Roma

Sovrimpressioni is a show for a limited number of spectators linked to the project, loosely inspired by the 1986 film by Federico Fellini, Ginger & Fred.

As we have been doing for some time, we are preparing more than one work around the same object of study, in this case three: besides Sovrimpressioni, the work Avremo ancora l’occasion di ballare insieme (We will still have a chance to dance together) will be premiered in autumn, and the documentary film about the work that we are doing with Jacopo Quadri (featuring photography by Greta De Lazzaris), Siamo qui per provare (We are here to try) will be released at the start of 2022.

What is Sovrimpressioni? We have stolen the title of Andrea Zangotto’s wonderful poetry collection and his need to superimpose artifice and nature, mother tongue and neologisms, relationships with things and glints of thought. All this touches us in the relationship that we have long woven between biography and fiction, between the figures we pursue in order to know each other better and the present, the historical background putting pressure on our choices, confusing them, and denying or confirming them.

In Fellini’s film, two artists who have never been close to success, Pippo and Amelia, known for their imitation of the famous couple Ginger Rogers and Fred Astaire, perform again in public after many years on a television program full of banality and vulgarity.

After years of working together with others, Daria and Antonio return to the stage as the couple that made them famous. They have been successful in their own way, their sustained proximity has blurred some of the limits between them and simultaneously, their longstanding coexistence on the stage has led them to become less of a friend, and more avant-garde in their need to stand out.

He doesn’t have much sympathy for Giulietta Masina: the dress she wears in the film seems outdated, but this word that he thought was negative becomes an opportunity, an achievement. He discovers that behind the irritation he feels for such a seemingly docile female figure there are initially unexpected common points.

He is afraid of getting old, he thought —like Fellini— that it would only happen to others. He sees it as courageous that Marcello Mastroianni’s make-up artist has thinned his hair, pulling it out one by one with tweezers, in such a way that even the appearance of his baldness gives him the spitting image of the director.

What happens on stage takes place between the moment when the two enter the space from the outside —from their present— and the moment in which, after an hour, they have become aged, not in order to resemble the two actors or the two characters, but to resemble their age have, which they cannot yet see from outside.

A.D. and Santarcangelo Festival with the support of Carrozzerie and n.o.t Roma and Ostudio Roma 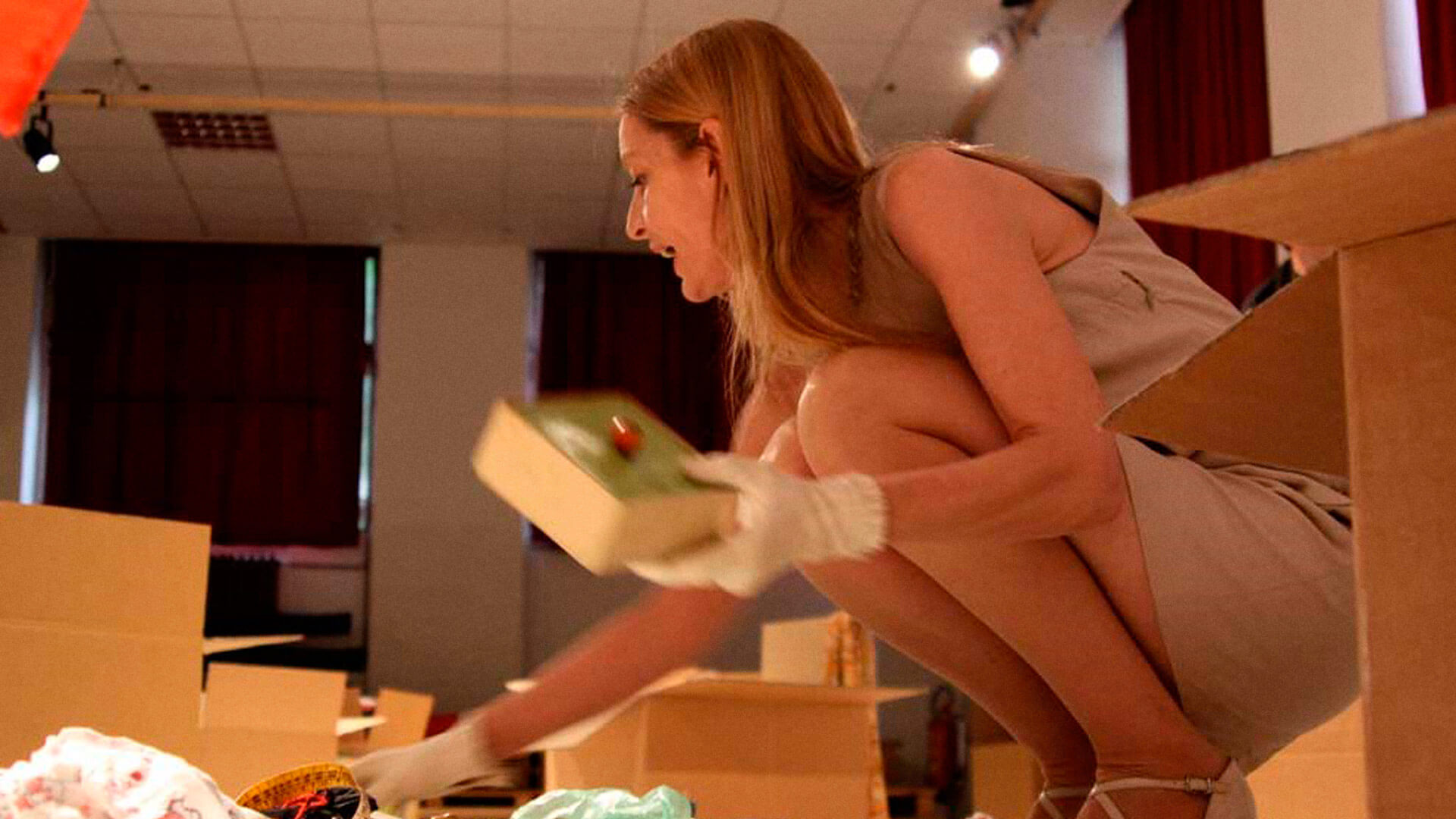 Actress, author and theatre director. After being a finalist in 2011, she won the 2012 Ubu Award for Best Actress for Lucía Calamaro’s El orígen del mundo and for Reality, the show written and performed together with Antonio Tagliarini. In 2013, she received the Hystrio Award.

Since that year, he has worked on shared projects with Antonio Tagliarini. The first work that arose from this collaboration is Rewind, a tribute to Pina Bausch’s Cafè Müller (2008). In 2009, with the support of ZTL-Pro, they created de la A a D y viceversa, freely drawing inspiration from “The Philosophy of Andy Warhol (From A to B and Back Again).” In 2011 they started the “Reality Project” which has given life to two works: a performance, czeczy/cose, and the show Reality, which made its debut at the In-balance Festival in Castiglioncello in 2012. In November 2013, she made her debut Ce ne andiamo per non darte otras preocupaciones at the Romaeuropa Festival in Rome, which features them on stage alongside Monica Piseddu and Valentino Villa. In 2014, they won the Ubu Award for the best new playwright of the year and the volume on their texts, “Trilogía de lo invisible. In 2015, the show won the award for the best foreign show in Quebec/Canada.

In 2014, for the University of La Sapienza in Rome she coordinated the didactic and performative project on Peter Handke La tierra del sonido, the theatre of Peter Handke being curated by Valentina Valentini and Francesco Fiorentino. Also in 2014, with Tagliarini, she created Il posto, a specific site for the Boschi-Di Stefano house-museum in Milan as part of the review of “Rooms”. In 2015 she was invited to Paris as a resident artist at the La Colline theatre where, besides presenting her projects at the Festival de l’Automne, she worked as an actress in the version of Pirandello’s I giganti della montagna directed by Stephane Braunschweig. In summer 2015, alongside Antonio Tagliarini she presented an outdoor show, produced by the Teatro di Roma, along the Via Marconi in Rome, Quando non so che fare cosa faccio, freely inspired by Antonio Pietrangeli’s film I knew her well.In 2016, again with Antonio Tagliarini, she created Il cielo è non un backdrop, presented in Rome at the Romaeuropa Festival and in Paris at the Atelier Berthier for the Odéon-Théâtre de l’Europe again for the Automne festival.

In 2017, she participated in the Radio3 radio programme “Ad alta voce” with the full reading of The Diary of Anne Frank, directed by Lorenzo Pavolini. She then played the part of Ginevra for the television series Sky written and directed by Niccolò Ammaniti, Il miracolo and in Alice Rorwacher’s film, Happy as Lazzaro.She created Memoria di ragazza, una lettura e qualche canzone, with Monica Demuru and Monica Piseddu.from Annie Ernaux’s story of the same name. The debut of her new work with Antonio Tagliarini, Almost nothing freely inspired by the film “Red Desert” by Michelangelo Antonioni is scheduled for autumn 2018. 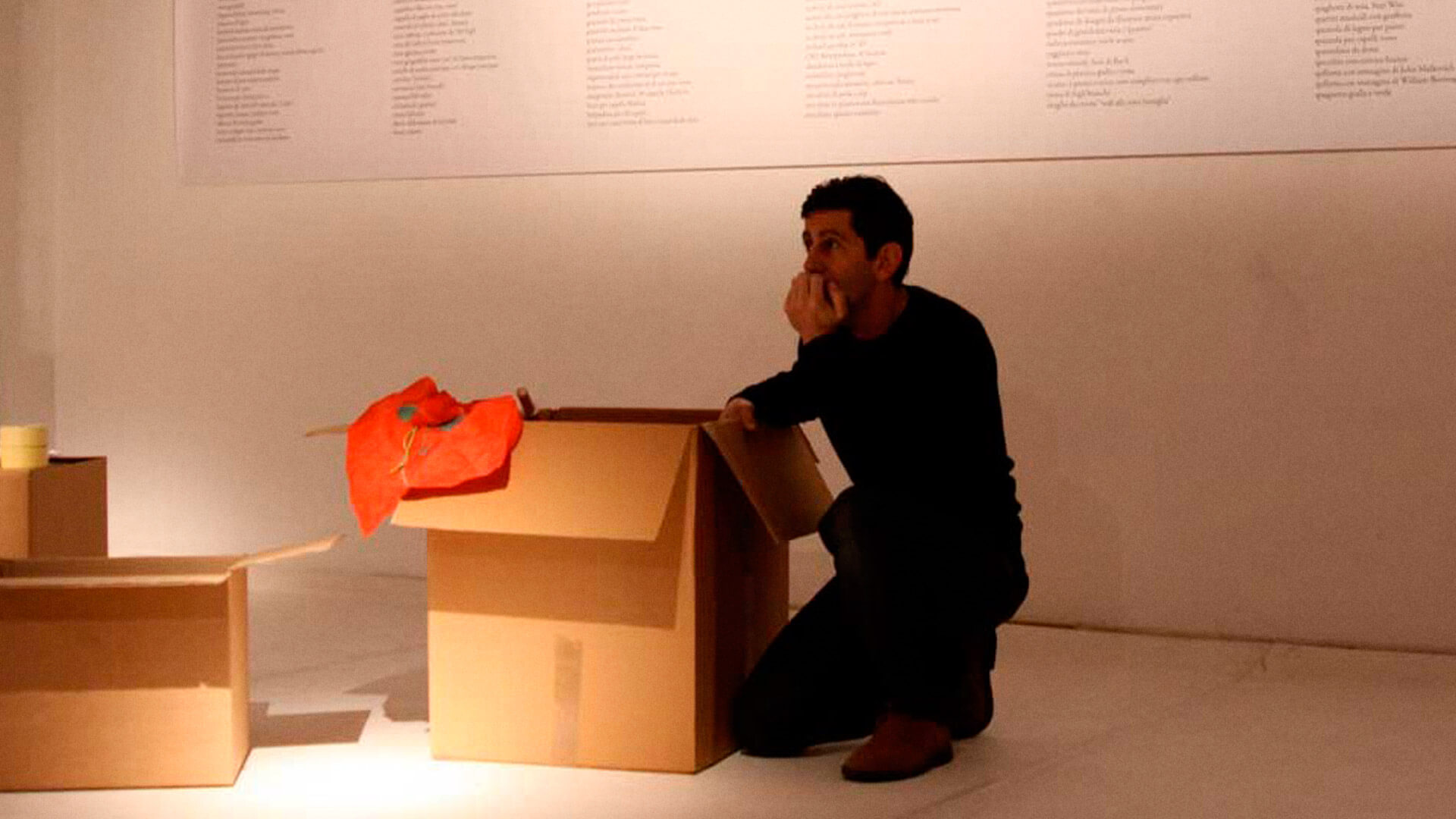 His first love, and consequently his training, is the performing arts and contemporary dance, which have a profound effect on his relationship with stage art. It wasn’t until later that he began to study and gain in-depth knowledge of more strictly theatrical art.

He is the author and performer of several shows and performances that he has presented at many Italian and international festivals (Germany, France, Switzerland, Portugal, Spain, South Korea, Great Britain, Brazil). These notable include: Freezy (2003), provisional title: Untitled (2005) and Show (2007) that won the first prize at the BE Festival in Birmingham in 2014.

With Jaime Conde Salazar and Filipe Viegas he began a research project, TODOS-CUERPOS (2014), which has produced several performances in public spaces, including ¿Me ves? (2014) and the show Todos (2015 Culturgest Lisbon).

He was invited to take part in several international art projects: APAP 2007, Sites of immagination 2008 and Pointe to Point Asia-Europe Dance Forum 2009.

He works and collaborates with several artists, including: Raffaella Giordano, Massimiliano Civica and Fabrizio Arcuri.

In 2007 he met Daria Deflorian, in a major and dazzling encounter. This gradually gave rise to a deep friendship and intense artistic collaboration. The first show by the duo Deflorian/Tagliarini debuted on 12 March 2008 with Rewind, a tribute Pina Bausch’s Caffè Müller. This collaboration has given rise to several projects, shows, specific sites, and together they continue to challenge performance art, live presentations, and what it means to do art today.